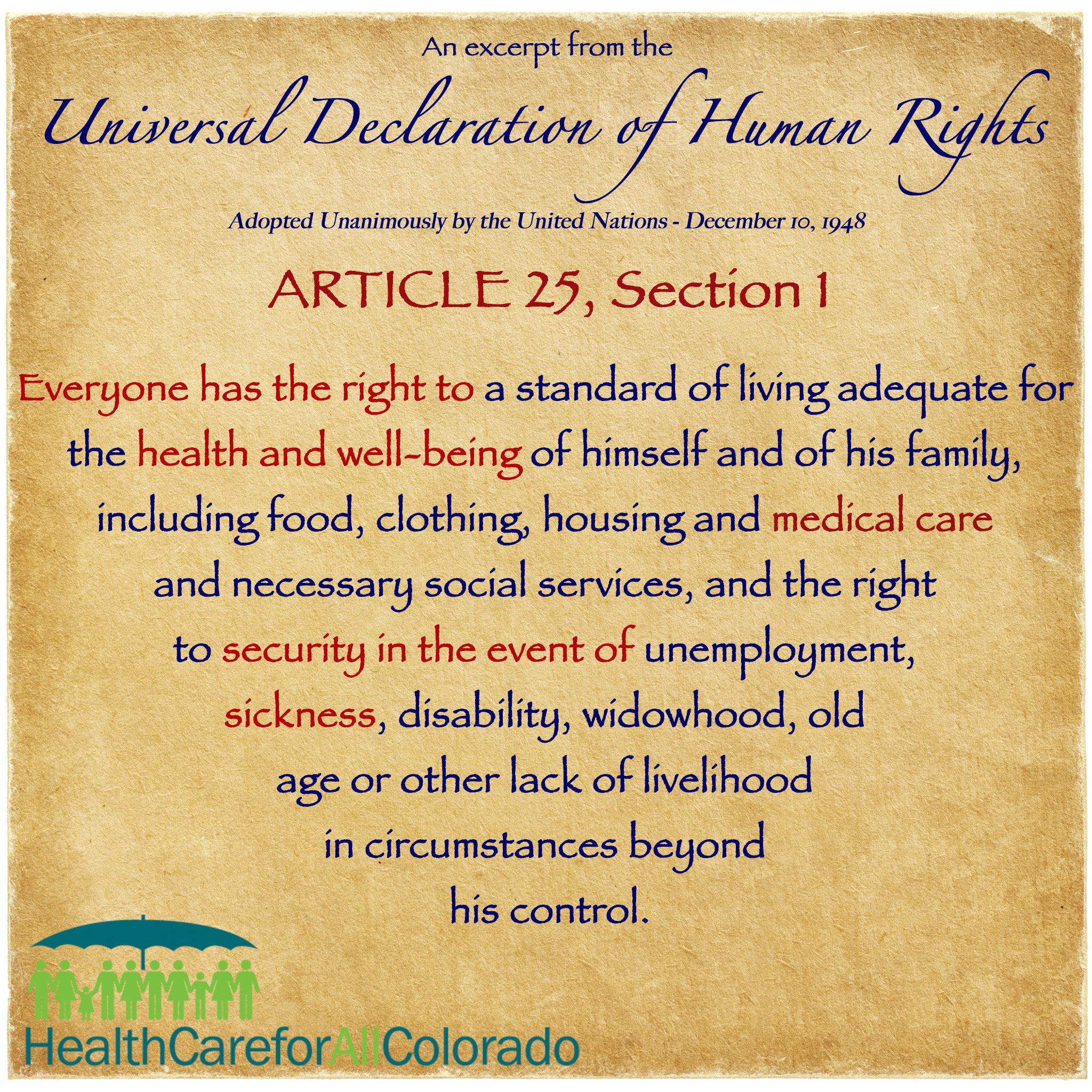 It turns out that the United States has been part of crafting other countries’ Constitutions in which health care is a right for those citizens.  For example, from an article published on the Huffington Post, “The Iraqi Constitution was carefully crafted (in 2005) to mandate universal health care and, in fact, notes:  Article 31 reads: ‘First: Every citizen has the right to health care. …’.”

The World Health Organization also reports that every country on earth is now party to at least one treaty that recognizes health care as a basic human right.  Yet, the United States seems unwilling to stand up for those rights it sees as critical for inclusion in treaties and constitutions it has written and defended for many decades.

The Universal Declaration of Human Rights that Eleanor Roosevelt helped draft in 1948, included both Article 19, which enshrines freedom of the press and freedom of expression as a right, as well as Article 25, which states:

“(1) Everyone has the right to a standard of living adequate for the health and well-being of himself and of his family, including food, clothing, housing and medical care and necessary social services, and the right to security in the event of unemployment, sickness, disability, widowhood, old age or other lack of livelihood in circumstances beyond his control.   (2) Motherhood and childhood are entitled to special care and assistance. All children, whether born in or out of wedlock, shall enjoy the same social protection.”

The National Economic and Social Rights Institute (NESRI) also tracks the places and official documents and designations in which health care is protected as a human right.  NESRI also reports:

“United Nations committees (‘treaty bodies’), comprised of independent experts, oversee the implementation of particular human rights treaties. These committees oversee the treaties by, among other things, receiving government and civil society reports on the implementation of the treaties, making comments to the government reports, and issuing general comments about the treaties or specific right contained therein. With regard to the human right to health, in the year 2000 the UN Committee on Economic, Social and Cultural Rights issued legal guidance for implementation of this right:   General Comment 14 is now a key source for advocates seeking to apply human rights standards to their own national, state or local context.”

In Colorado, we have the opportunity to advance Ballot Initiative #12, the Right to Health Care, which would create health care as a human right and public good.  The initiative reads as follows:

“Shall there be an amendment to the Colorado constitution concerning the provision of one public health insurance program to allow all Colorado residents access to a single standard of health care as a matter of human right and public good, and, in connection therewith, requiring the General Assembly to enact legislation creating a public health insurance plan, requiring the Colorado department of revenue to collect a premium not to exceed 9% of an individual’s income to fund the plan, and prohibiting the control or administration of premiums by a for- profit, nonpublic entity or corporation?”

If you believe this as we do, we encourage you to SIGN ON HERE as an endorser of this basic principle. Individuals and Organizations are both welcome, and we will keep you posted on our progress towards finally realizing our national commitment to health care as a human right.