Marching To and Fro -- Homeless for Health Care

This weekend I was lucky enough with the help of Progressive Democrats of America and National Nurses United/California Nurses Association to attend the Healthcare-NOW national strategy conference in Nashville, TN.  Ever since I met Healthcare-NOW's founder, Marilyn Clement on July 17, 2007, in Washington, D.C.,  I have been absolutely blessed to know the committed and compassionate people who build the grassroots movement for improved and expanded Medicare for all for life.

In the fall of 2007, I was part of a low (very low) budget bus tour with Healthcare-Now that wound its way through the southern states and reached out to people all along the way in some of the poorest communities and areas in order to listen and learn about the suffering that is the U.S. health care system  One of our first stops back then was in Nashville where I met John Lozier, the executive director of the National Health Care for the Homeless Council.  And this weekend I was lucky enough to see John again as our paths crossed at the strategy conference, and we chatted about homelessness and our mutual concerns.

During the filming of SiCKO in 2007, we also met and grew to know Rev. Andy Bales of the Union Rescue Mission in Los Angeles, so we already felt the loving strength of those who embrace the homeless every day of their professional lives.  Both Andy and John are intelligent, talented men who could have made much more money working in other fields but have chosen a different path.  Both help lift us, and both helped us rebuild our dignity. 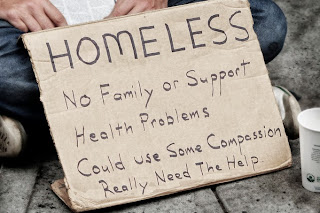 It isn't fun to be homeless in America.  Since Larry and I have been financially devastated by the for-profit health care system in the U.S., we have been without much housing security at all.  In fact, since 2004 just after my first cancer diagnosis and Larry's continuing heart issues changed the course of our lives, we have moved 11 times.  We have only twice during that time been completely without a place to live (once we lived in a cheap motel room for a bit) and another time in one room of a small home, but to say we have felt secure in our housing would be lying.  We were most stable recently when we lived for four years in one rented home in Maryland.  We weren't secure; we were just less insecure.

That is one of the difficult traumas of the broken health care system in America.  Even with health insurance, we have been unable to truly rebuild because every illness -- every inevitable bump in the road of life -- tends to take us three steps backwards just when we had clawed to get two steps ahead.  Keeping health insurance coverage and the ability to access health care has had to be our priority.  Housing and food came in second.  We'll never own a home again.  It would take a least 20 percent down and much better credit than we have time to rebuild at our age.  And there isn't one banker in America kind enough to help us out -- or people like us.

It is so good to see John as every time I do I feel a little less like a failure and a little stronger for the fight ahead.  This weekend, just his sharing of the concept of housing insecurity was a comfort.  He understands. It's the gnawing and nagging worry that the next move will be to the streets where I don't think we could survive long.  So following the Colorado floods last month, we know we have to move again soon.  What else is new, you may ask?  Nothing really, except that we know that there are millions of other people just like us who could sleep a little more soundly and call somewhere "Home Sweet Home" for a while with an improved and expanded Medicare for all for life health care system.

Do you want stronger, more stable communities in America?  Me too.  Providing health care for all would be a great way to start.

** These figures are calculated based on the Harvard University studies on excess deaths in the U.S. due to lack of insurance coverage or the ability to pay for needed health care, and the Harvard University study that calculated the high percentage of personal bankruptcies attributable to medical crisis and debt in the U.S. 123 people die daily due to lack of coverage or cash to pay for care; 1,978 go bankrupt every day due to medical crisis and debt though the majority had insurance at the time their illness or injury occurred. This statistic is also based on the 1.2 million bankruptcies in the U.S. in 2012, according to the U.S. Bankruptcy Court, and calculating those medically-related bankruptcies from that number.http://www.healthcareforallcolorado.org/endorse_right_to_health_care