I thought about making some clever analogies:

Suddenly, it seemed like a whole fictional epic struggle between the forces of good and evil could be mapped out directly across the American struggle for health care justice for all. But I didn’t have time to rewrite the whole space opera, even if it was just search-and-replace. So I made a couple of quick web searches for some real-world tie-ins.

It didn’t take long to find some. 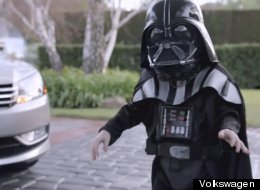 Do you remember the young boy in the Superbowl VW commercial in 2011? The one dressed in a play Darth Vader costume, trying unsuccessfully to bring inanimate objects to life until it seems to work on his family’s VW (remotely started by clever Dad).

That young actor is Max Page. He had a congenital heart defect that required heart surgery and a pacemaker at the age of 3 months. Just last year, he needed heart surgery for an eighth time. Also as a father with a son that has a genetic condition requiring expensive medical care, I immediately went to that place that I always go when I hear a story of another family facing staggering medical bills. “Do they have insurance? If so, what isn’t it covering? How does their crisis of coverage overshadow dealing with the medical issues?”

Presumably, they have decent coverage. It seems like Max is getting the care that he needs. Yet like our family, we also see that young Max spends much of his time trying to bridge the gap for others who aren’t so fortunate by doing public speaking and raising money and awareness to help them.

Max is lucky, and I am lucky, to both be able to give back to others.
But access to health care in the US shouldn’t be about luck.

I also stumbled across the recent story of David Farland, a writer who has penned, among other things, many Star Wars novels. His story is not as fortunate as Max’s. Like so many Americans, his family purchased what they thought was the best insurance possible. But when he needed to use it in 2003-2004, he found it to be completely inadequate, ultimately losing his house, car, and life savings and narrowly avoiding bankruptcy.

But David’s story doesn’t end there. Despite every effort to get good coverage, they couldn’t. Just a month ago, his 16-year-old son, Ben Wolverton, had a longboarding accident which resulted in over a million dollars in medical bills, which they are now personally responsible for. You can read more about David's plight here.

David’s story is all too common to people in his line of work, and to artists in general. Writers, actors, painters, musicians, singers... all important jobs, but rarely ones with access to employer-sponsored health insurance. Many times those of us in corporate jobs with benefits take this dichotomy for granted. Not everyone can, or should, have a “corporate” job. We may create the lines in the world, but it is the artists that color everything in.

So, without medical coverage and facing a (second) mountain of medical bills, David’s family is forced to resort to personal fundraising at a time where they should instead be focused on wellness and recovery.

I see this same story play out often when I watch the local news. Someone is injured, often a child, and the uninsured or underinsured family must resort to bake sales and other fundraisers to try and make a dent in the medical bills that ultimately consume everything the family owns or has saved. 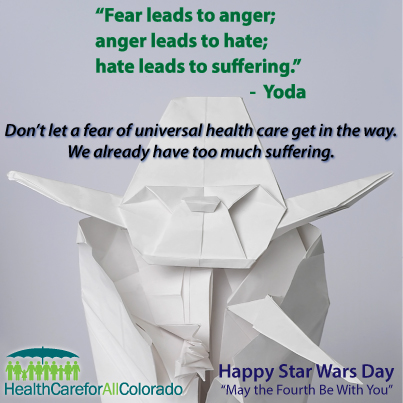 Neither Max’s nor David’s medical issues were foreseeable, not even for a Jedi. They weren’t brought about by unhealthy lifestyle choices. Demanding “personal responsibility” through high health care cost sharing won’t reduce these medical costs. They only force families in medical crisis to shoulder far more burden than they can.

These tragedies wouldn’t have to be so tragic if we had a universal public health care system that would take care of everyone and protect us all from the financial ruin of catastrophic medical bills. Plus, in addition to saving billions of dollars every year, it would allow many more artists currently stuck in “jobs with benefits” to pursue their dreams -- perhaps even to write the next big Star Wars adventure.

If you agree, please let us know by endorsing our petition for universal health care as a human right. May The Force Be With You.